A lottery rollover occurs when no one wins the jackpot in a particular draw. Each lottery game has its own rules about what happens in this scenario, but typically the value of the jackpot for the next draw will increase. Not all National Lottery games have rollovers, while those that do - Lotto and EuroMillions - have different limits on how long the jackpot can keep increasing.

Why Do Lotteries Have Rollovers?

National Lottery rollovers exist so that jackpots can increase in value when they are not won, which creates more excitement for players as there is a chance to win an even bigger prize in the next draw.

The National Lottery's aim is to raise as much money as it can for good causes, and rollovers help to generate more revenue for worthy projects across the UK.

How Do Rollovers Affect Ticket Sales?

It's not a strict rule, but more tickets tend to be sold the higher a jackpot climbs. For example, between July and October 2019 the EuroMillions jackpot went on a record run of 22 rollovers before it was finally won and weekly ticket sales more than doubled in that period. The table and graph below show how ticket sales increased over the 11 weeks of that rollover run: 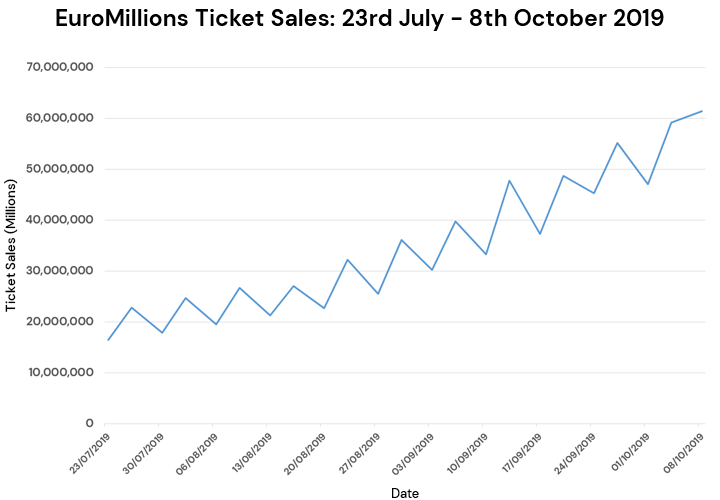 The line in the graph is not smooth because more tickets are sold for Friday draws than Tuesday draws each week.

Which Lotteries Have Rollovers?

Most National Lottery games do not have rollovers. The prizes are structured differently in these games, with fixed amounts awarded to winners in every draw. The table below shows a list of lotteries and whether or not the jackpot rolls over.

The Lotto jackpot starts at £2 million on a Wednesday or £3.8 million on a Saturday. It rolls over if it is not won, but there is a limit for long it can keep climbing and the jackpot does sometimes have to 'roll down' if nobody wins. A rolldown is when the jackpot is split between winners in other prize categories, significantly boosting the payouts for thousands of players.

How many rollovers before a rolldown?

The Lotto jackpot can only roll over for five consecutive draws. In the next draw, it must be won and the top prize will roll down if there are no tickets that match all six numbers. Go to the page on Lotto Must Be Won draws for more information.

EuroMillions has a starting jackpot of €17 million and this can keep rolling over until it reaches €230 million. When it hits this cap, the top stays at that amount and any extra funds that would have boosted it higher are shared between players in the next winning prize tier.

It can only roll over four times at the cap; if there is no jackpot winner in the fifth draw the entire amount will be shared between winners in the next winning prize tier. Once the maximum jackpot has been won or rolled down the cap than increases by €10 million. See the EuroMillions Jackpot Cap page for more information.