Lotto Changes: 'Match 2' Winners to Get £5 in Rolldown Draws

Changes are being made to Lotto’s Rolldown draw prizes from Saturday 7th November, meaning for the first time in National Lottery history, it will be possible to win £5 for matching two Lotto numbers. The new cash prize will only be available when there is a ‘Must Be Won’ draw, which regularly sees cash prize tier winners receive a boosted prize if the jackpot isn’t won.

How do Must Be Won Draws Work?

Must Be Won draws tend to take place every few weeks and are usually the result of a 5x rollover. Under the Lotto rules, when the jackpot has rolled over five consecutive times, the jackpot must be won in the sixth draw - this will be the same under the new rules.

In Must Be Won draws, if no players match all six numbers, the entire Match 6 jackpot fund is rolled down and shared between all lower tier cash prize winners. Currently, this means that players in the Match 5 + Bonus, Match 5, Match 4 and Match 3 tiers win significantly larger prizes than usual. Match 2 winners currently receive a free Lucky Dip for a future Lotto draw.

Under the new changes, Match 2 players will also be added to the list of cash winners in Rolldown draws, receiving £5 in addition to the usual Free Lucky Dip prize. This means that, should the jackpot roll down in a Must Be Won draw, all players that win a prize (from Match 2 up to Match 5 plus Bonus) will receive a bigger prize than usual.

The table below shows how the jackpot is currently split between the other prize tiers in a rolldown, and how it will be split after November’s changes:

*From remaining funds after £5 prizes have been deducted

There will be no change to the Lotto ball matrix or ticket price as part of the November shake-up. However, the addition of the fixed £5 prize means that there will be less money in the overall Prize Fund in rolldown draws for other cash tier winners. This means that it’s likely that winners in the Match 3, 4, 5, and 5 + Bonus categories will still receive a bigger prize than usual, but it’s unlikely that the boosted amounts will be at the levels they are prior to the changes coming into force.

Take a look at the breakdown from the last Lotto draw that rolled down - Saturday 18th July.  There were no Match 6 winners in that draw, which meant that all lower tier cash winners received a bigger prize than usual. Below you can see the individual prize amounts that were awarded as a result of the rolldown. Each tier also shows the percentage increase from the regular prize amount, had the jackpot not rolled down:

* In Rolldown draws from 7th November, winners in the Match 2 tier will receive a free Lucky Dip plus an extra £5 cash. 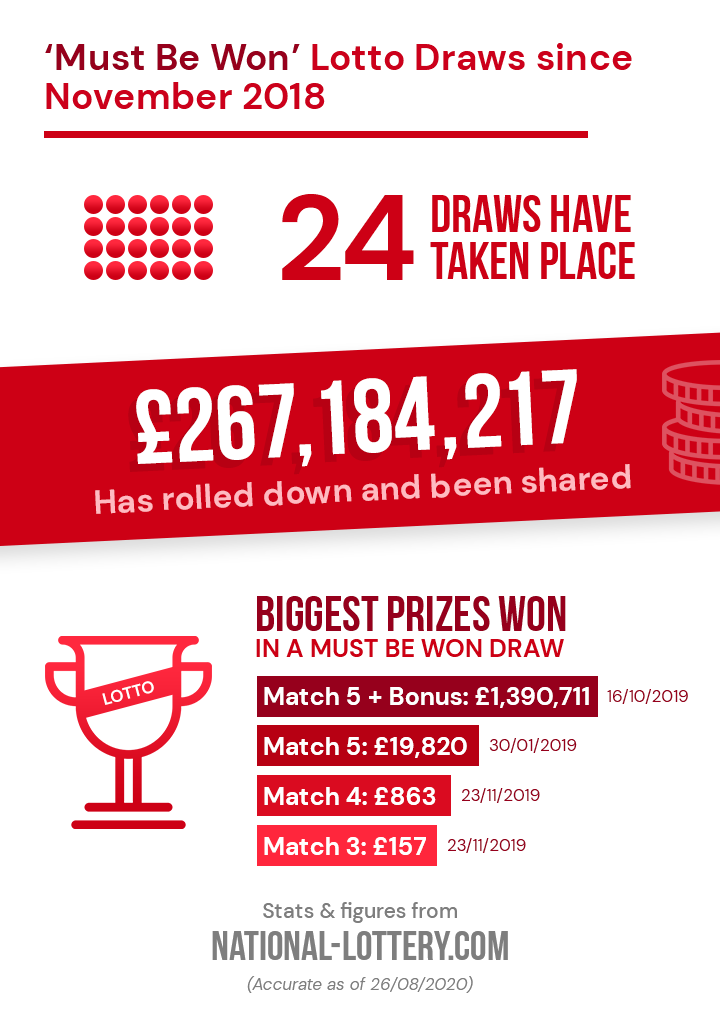 Special 'Must Be Won' Draw as Changes Come Into Effect

To mark the launch of the new boosted Match 2 prize, a promotional Lotto Must Be Won draw will take place, celebrating the changes and offering players their first chance to scoop one of the £5 prizes. Based on previous special events, it is expected that there will be a guaranteed minimum jackpot on offer (usually £10-£20 million). It will all be to play for in the draw; remember, though, if someone matches all six numbers, the jackpot won't roll down! Find out more on the Events page.